Will Reilly previews what could be a crucial Champions League match between PSG and Liverpool, Weds 28th November, 8pm, BT Sport 2

The eye-catching game on Wednesday on Matchday 5 of the 2018-19 Champions League is PSG v Liverpool in what is still a wide-open Group C.

PSG have lost one match all season – that was against Liverpool in the Champions League (3-2 at Anfield on Matchday 1 in September). They have won all 14 of their league games, keeping eight clean sheets and scoring 46.

For sure, they are goal-machines, although Liverpool have three of their own.

Unbeaten in the Premier League this season, Liverpool have scored ten goals in their last four games, which suggests that they are beginning to fully find their stride.

Mo Salah has scored five times in their last eight league games, Sadio Mané has scored two in his last four and Roberto Firmino three in his last nine. To my eye, though, ‘Bobby’ has found his form slowly this season but, like the team, is edging towards full stride.

There is a lot at stake.

Liverpool are still top of Group C with six points with two games to go. Napoli also have six points but their goal difference is plus 1. Liverpool’s is plus 2.

Liverpool’s opponents on Wednesday, PSG, have five points and a goal difference of plus 4. Red Star Belgrade are bottom of the group but they have four points, although their goal difference is minus 7.

Liverpool’s 2-0 loss in Belgrade last time is the result that has set the cat amongst their pigeons: if Napoli and PSG both win on Wednesday then Liverpool will drop into third place in the group with one match to play – which will be at home to Napoli. They would, of course, rather avoid that scenario.

However, if Liverpool win, they will qualify for the knock-out stage of the competition. The only way they can guarantee that is by winning in Paris. Furthermore, a defeat at the Parc des Princes would mean a fourth-successive away defeat in the Champions League for The Reds.

If PSG lose and Napoli win, PSG will be out of this year’s competition.

Liverpool ought to have won comfortably at Anfield, and at one stage that looked likely. Ultimately, they scrambled home with Roberto Firmino’s 90th-minute goal snatching a 3-2 win.

PSG played a 4-3-3 formation that night with Marqhuinos, normally a central defender, playing in midfield. That won’t happen on this occasion. PSG now play with three central defenders, a move that has worked well for coach Thomas Tuchel.

The emergence of Julian Draxler as a midfield partner to the fit-again Marco Verratti has been an interesting feature of PSG’s season. For club or country, Verratti has yet to play on a losing side this season.

Marco Verratti is back for PSG – he never played in the first game at Anfield – and that is good news for PSG. As is the confirmation that both Neymar and Mbappé should be fit to start.

They would both be big losses for PSG.

After missing Liverpool’s 3-0 win at Watford in the Premier League on Saturday, Joe Gomez is expected to be fit. Adam Lallana and long-term absentee Alex Oxlade-Chamberlain miss out. Jordan Henderson was sent off at Watford for two yellow-card offences and will miss Liverpool’s next league game, although he is eligible to play this evening.

This is a fascinating contest, which will tell us as much about the two German coaches, Jürgen Klopp and Thomas Tuchel,  as it will about the players.

Liverpool look certain to field a solid midfield ahead of their frugal back four, while PSG’s three central defenders will restrict space for Liverpool’s potent forward line.

It’s not an easy one to call, although I feel that it will be a tight game.

As it is a ‘Double The Odds On First Goalscorer Bets’ match with us, I’ll suggest Edinson Cavani, who is 7/2 to score first 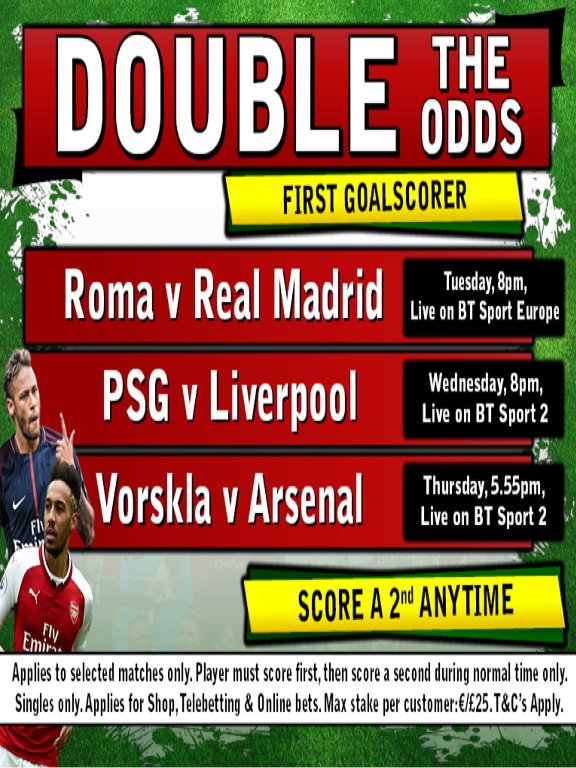